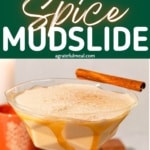 This Pumpkin Mudslide Cocktail is a fall-inspired take on classic mudslides that will be your new favorite cocktail. It’s perfect for everything from cozy fall nights to holiday parties and everything in between.

What is a Mudslide Cocktail?

Mudslides are traditionally made from vodka, coffee liqueur, Baileys Irish Cream, and heavy cream with either chocolate shavings or a drizzle of chocolate inside the glass. Think of them as an adult milkshake.

Mudslides originated at the Wreck Bar on Grand Cayman Island in the 1970s. Apparently, someone ordered a White Russian, but the bar was out of heavy cream, so they decided to sub in Irish cream liqueur. Essentially, a mudslide is spin-off from a White Russian that is typically made with vodka, cream, and coffee liqueur.

Ingredients for a Pumpkin Mudslide Cocktail

To make a Pumpkin Mudslide Cocktail, you’ll need some ingredients that you probably already have or they are generally available at most grocery and liquor stores.

How to Make a Pumpkin Mudslide Cocktail

The instructions couldn’t be easier for this Pumpkin Mudslide Cocktail, so let’s go ahead and shake one up.

First start by adding coffee vodka, pumpkin puree, spices, Baileys, and half/half into a cocktail shaker and add ice. Shake it really well. I shook mine a little longer than usual, because I knew the longer that I shook the cocktail shaker, the more the half/half would create a whipped cream-like texture.

Drizzle the inside walls of a martini or hurricane glass with the caramel drizzle. Hurricane glasses are traditional to Mudslide cocktails, but I used a martini glass. The Viski faceted martini glasses are my favorite – they have such an amazing design and I think that the unusual shape of the glasses works really well when you are drizzling syrup on the inside of a cocktail glass.

Strain the cocktail into the glass lined with caramel. Garnish with a sprinkle of pumpkin pie spice and/or a cinnamon stick.

Variations of a Pumpkin Mudslide

If you want to have a little fun and make a variation of this pumpkin spice mudslide, you could try a variation with all of the classic Thanksgiving pies:

Clearly, this cocktail was made for Fall. So it’s a natural fit anytime in the “ber” months – September, October, November, and December.

Shop My Amazon Favorites for Cocktails 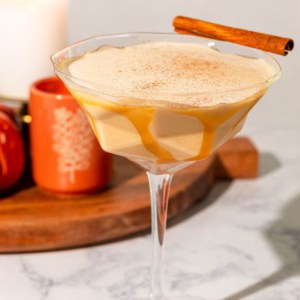 Melissa
This Pumpkin Mudslide Cocktail is a fall-inspired take on classic mudslides that will be your new favorite cocktail. It’s perfect for everything from cozy nights to holiday parties and everything in between.
5 from 1 vote
Print Recipe Pin Recipe
Prep Time 5 mins
Total Time 5 mins
Course Cocktails, Drinks, fall
Cuisine American
Servings 1 cocktail

Hi, and welcome! 👋🏻 I’m Melissa, a RD with a Food Science degree living in Charleston, SC. I love sharing all my favorite food and cocktail recipes right here.